Hey, Where Have I Been?

I am just an awful blogger. I honestly don't know how some of you (and you know who you are) blog every single day! We had a busy week since I was soliciting design advice! I will post the results of my Land's End shopping spree once I remember to take my memory card home from my office computer and put it back in my camera where it belongs!

Thursday night, we had a work dinner at Abe & Louie's in Boston. You have not enjoyed one of their filet mignons until you've eaten it while watching a power point presentation on genital herpes! On our way out of the restaurant, there was some excitement on the sidewalk. Mike Lowell, resident third baseman extraordinaire, was trying to make his way into Abe & Louie's. He looks like such a great guy, very unassuming and taller than he looks on tv. Then some of the drunk after work business men were remarking about how cool it was that they got to see Lowell and Varitek on the same night. Jason was inside having dinner. So we turned around and went in to say hello to him. Now, before you all think I am a crazy stalker, we know quite a few of the players as The Doc is the unofficial team OB/GYN. We found him, I got a nice big hug, and wished him a great season. Now, I am not saying it was my good luck hug that helped him out with his Grand Slam on Saturday, but you never know!

Friday was nice a quiet. Madigan had a playdate after school with a bunch of her friends. I went into Boston to pick her up and had dinner at her friend's house. She was sound asleep when we got home. Saturday we had a fun birthday party for my college roommate's daughter. We could not stay long because I had to bring Madigan right back into Boston for a sleepover at her friend's house. The Doc and I had a dinner to go to at the house of one of the muckety mucks from the hospital. Sunday was hot as hell. Yes, I am officially the first person in Massachusetts to say that the weather is too damned hot. Especially when I have a pool in my backyard that is still CLOSED for business! I am so looking forward to opening it and doing some bbq'ing!
Posted by dmmlandcruiser at 12:18 PM No comments: 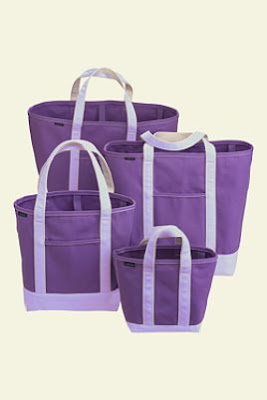 I want to order one of these great Land's End totes in this color. What color thread would all you fashionistas suggest for the monogram? The tote is for Miss Madigan. She has denounced everything pink and is moving on to purple and the LE totes are a staple in anyone's closet. Bring on the colors!

Posted by dmmlandcruiser at 7:56 AM 11 comments:

I am too technically challenged to figure out how to embed this video on my blog from youtube (anyone know how to do this?). Instead, I need you to clik HERE to see it. Post a comment and tell me what you think!
Posted by dmmlandcruiser at 12:40 PM 4 comments: 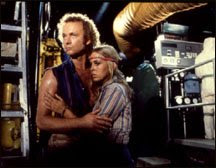 No, not writing on this blog. I would not want to disappoint the two of you who read this! I am all done watching General Hospital. The story lines are just too boring. I started watching way back in 1981 when Luke, Laura and Robert saved the world from Mikkos Cassadine and his climate machine. Those were the days. Lately, I have been fast forwarding (I DVR the show every day) through almost every scene. It is hard to let go of an old friend but I think it is time. There are some great actors on the show but even they must be frustrated by their current storylines. With the way this economy is going, I would not be surprised to see the end of daytime television!
Posted by dmmlandcruiser at 8:45 AM 5 comments:

Patron of the Arts 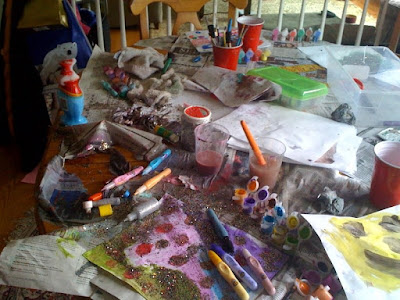 While I fully support artistic creativity in my daugher, I am not a fan of the clean up.

Posted by dmmlandcruiser at 11:46 AM 2 comments: 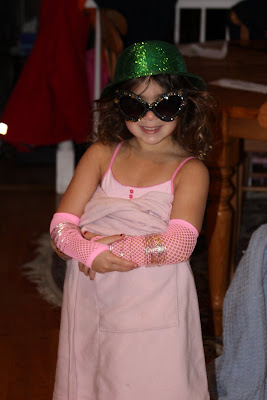 I went into Madigan's room this morning to wake her up for school. She asked me if I could just let her sleep for 10 more minutes. I told her that was fine and figured I would close my eyes too. She told me she needed quiet and could I please leave the room. I went downstairs, and I heard her footsteps across her floor, the door close and the lock pop. Five minutes later, this came into my kitchen. I thought it was a crazy Leprechan. She yelled "Happy April Chicks Day Mommy" and took off her disguise. "Wow, is that you Madigan??? and what do you mean April Chicks Day?" "Mom, she said, today is April Chicks Day, the day you play tricks on people. Silly Mommy!!" Consider yourself informed!

Posted by dmmlandcruiser at 7:34 AM 3 comments: