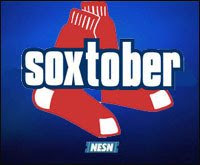 Congratulations to our favorite Boys of Spring, Summer, and Fall. In an amazing night at Fenway, The Red Sox won and then the Yankees fell to the Orioles in extra innings delivering our first Division Championship in 12 years. Oh how great it is to be a Boston Sports Fan!
Posted by dmmlandcruiser at 7:07 AM 3 comments:

It is one of those very dreary, dark, and rainy Saturday mornings. The kind of morning where you just want to stay in bed all day and watch movies while you eat cookie dough. The mood here at the Landcruiser House is complimentary to the weather. Our dear Red Sox blew their lead last night to the Yankees. It was such a great game right up until the end where our usually stoic and infallible pitchers, Okajima and Papelbon, allowed the Yankees to rally and pull of a crushing win against our Boys of Summer. If this is any indication of what the playoffs are going to be like, I may just quit watching now. And don't get me started of what the New England Patriots have been doing lately.

We finished off the first full week of school and it was a complete success. I think Madigan only lost 3 hair pretties and one headband and she only left her required hat on the bus once. She had her first playdate after school yesterday which was a real coup for me because I got to sit out by the pool until 2pm ALL BY MYSELF!!!! We also got to meet our new cousin, Marissa Bella who is already 9 weeks old (better late than never) although the PlayDough got more attention than the baby.

Our week was capped off by my stepson arriving home with a busload of 17 year olds to stay the night. I honestly don't ever remember having that much energy or being that skinny. I think I heard the last noises about 5am this morning, so I don't expect the basement door to open anytime before noon today. And let me tell you, times have changed in the 19 years since I was in high school. We have a coed sleepover crowd! They are all good kids, although Madigan did hand over a lighter that she found in the bathroom. I am sure that only belongs to the two exchange students that are here from Spain, right? I mean everyone knows that those Europeans smoke like chimneys. If I really investigated matters I would probably find Cheech and Chong somewhere down there. I love how my husband believes that these kids are so innocent and would not even know where to find weed. He was clearly the Nerd in his class!So, now I have to quietly entertain Madigan while a steady rain pours down and it is only 7:21am. Maybe someone in the basement could shove over and make some room for me on the sectional?
Posted by dmmlandcruiser at 6:23 AM 2 comments: 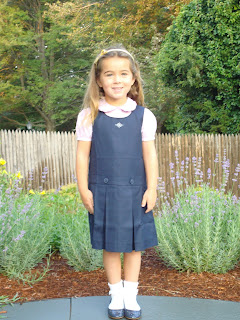 Well, she did it, my little Baby Girl left me for the greener pastures of Kindergarten 1. She could not contain her excitement, I could not contain my sadness. I never thought I would be one of "those mothers" who cries hysterically while chasing after the school bus. To my credit, I did all my crying the night before while I read her goodnight books. It was impossible not to get caught up in her excitement. The thrill of a ride on a school bus was contagious. Her smile was a mile wide. She was very polite at the bus stop and said her goodmornings to everyone. The part that was the hardest for me was that I was putting her on a bus with complete strangers. She knew no one that first day. Furthermore, most of the kids on the bus are all older than her, third grade and higher. I had nothing to worry about. The bus monitor said she had a great day, and that she had lots of fun. I could tell. When the bus pulled up for drop off at 4:15pm, Madigan was sound asleep. 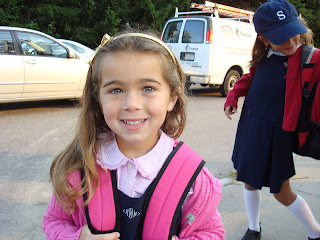 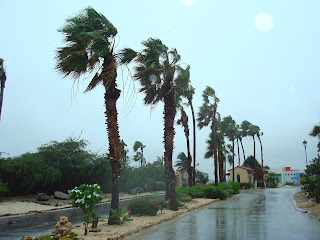 Well, Hurrican Felix was a Sissy! I say that in jest realizing how lucky we were to have him skirt farther North of Aruba than was expected. The storm was not bad in the least. Lots of rain and wind, but I have seen worse Nor'Easters in Boston. It started with heavy rains at 4am. When we got up around 9am, it just seemed like a heavy, overcast day. Around 10am, the rain started to pick up so we decided to go for a ride to the beach to see what was happening. It was more fierce along the coastline and it was actually pretty difficult to open the car door at the beach. It was amazing to see the normally calm azure waters churning with an angry force. It reminded me of the Seinfeld episode where George Costanza says, "The sea was angry that day my friends..." Watching the water slam into the rocks was awesome. The spray climbed so high into the air. It was truly a force of nature. There was some areas of the island that had flooding, but we did fine here on the Northwest tip of the island. There were some palm tree leaves and debris, but nothing catastrophic that I could see. It was over before we knew it. We came home, soaked to the bone with about 60 pictures. In fact, I think I ruined my new 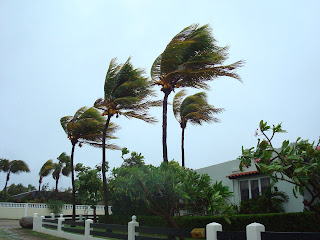 Sony Cybershot (should have gotten that extended warrenty from Best Buy, huh?) because the screen is a bit cloudy now. I did regret not having my good Canon Digital Rebel with me. I would have gotten some unbelievable shots with that. But better to ruin a much cheaper camera!

The remainder of the day was quite a bore. When there is no sun, there is nothing to do here. The stores are never open on a Sunday here in Aruba, so shopping was out irregardless of the Hurricane. Madigan watched lots of the Cartoon Network. The Doc worked on some medical stuff and I read a great book. It was called 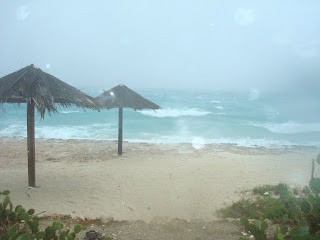 The Boleyn Inheritance. If you like historical novels, this is a great one. It is about Henry VIII and some of his wives. Great read!

The sun is back out today so we hope to have some fun before we go home tomorrow. Hope you all have a great Labor Day! 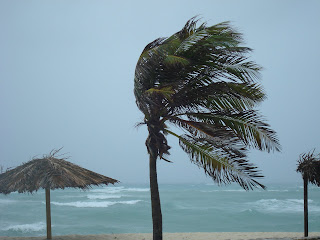 Posted by dmmlandcruiser at 8:55 AM 2 comments: 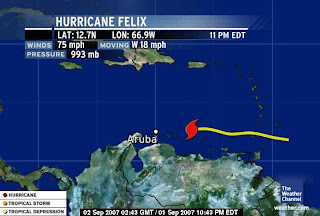 HI Everyone! Writing to you from Aruba where Hurricane Felix is fast approaching! We got word yesterday that there was a Hurricane Watch issued for the island. Aruba is below the "Hurricane Belt" and has not been victim to the wrath of Mother Nature for quite some time. The locals here say that hurricanes only come once a century to their beautiful island. Looks like this time, it could actually happen! I just brought in all of our lounge chairs and moved the grill into the kitchen. I don't know if these precautions are necessary, but it is foolish not to do so. I keep reading articles saying "tourists are flocking to the airport to escape from the island" and that the local hardware stores are mobbed with people buying up plywood and supplies. We went out for a delicious dinner to our absolute favorite restaurant, came home and celebrated the news that the Red Sox rookie, Clay Buckholz, had just pitched a No Hitter! I guess we should have been in panic mode, not vacation mode! Stay Tuned Faithful readers........
Posted by dmmlandcruiser at 9:51 PM No comments: